It’s been a busy few months for kyudo, Japanese archery, here in Georgia. In late July, we had the 2013 IKYF American Seminar in South Carolina, a major event that includes multiple Japanese Sensei traveling to the U.S. to further our teaching. Then, in September, our local organization GKR (Georgia Kyudo Renmei) demonstrated once again at JapanFest Atlanta, a great weekend.

Now, in a couple of weeks, we’ll be demonstrating once more at the beautiful Gibbs Gardens in North Georgia, as part of their new event, the Japanese Maples Festival.

Outdoor kyudo events in autumn always remind me of the first time I visited Japan, back in the fall of 2008, because I received my first exposure to kyudo during that trip, watching an informal practice in the inspiring Meijii-Jingu dojo. The beauty and serenity of kyudo entranced me then and still does to this day.

I was fortunate to see much of Japan during that trip, from Tokyo to Kyoto all the way up to Takayama. And smaller cities like Nara, Kamakura and Matsushima. 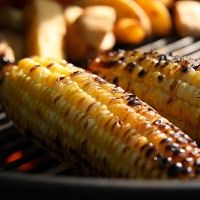 All those places were memorable, but for some reason fall also reminds me of one particular day in the city of Sendai, when we traveled to the top of a mountain to visit Sendai castle. It’s not the grandest castle in Japan, nor the oldest, but the view is extraordinary. It was a quiet day and in the courtyard, there was a lone vendor selling grilled ears of corn. That was the day I found out in Japan, they use soy sauce on their corn, not butter. That was the day I had the single best ear of corn ever. No hyperbole, promise.

As is often the case with such treats that stick in our minds, I always assumed I’d get back there to enjoy that corn again. It was just a matter of time. A place like Sendai would always be there to visit, after all. In fact, I journeyed to Japan once more, a couple of years later, but didn’t make it to Sendai that trip. But that was okay, I knew there would be a next time.

Then, in March 2011, the great Tohoku earthquake and tsunami struck. And Sendai was right in the middle of the devastation, threatening my certainty of the city’s continued well-being.

As I’m sure you remember, it was heart-breaking to watch the destruction rendered in not only Sendai, but many nearby coastal cities in that part of Japan. For me especially, having visited the city only a few short years before.

As many did, I tried to do what I could to help, making donations to relief organizations and sending prayers to all those affected. Still, the disturbing images stuck with me.

So much so that, months later during the Thanksgiving holiday, after a particularly difficult evening assisting my aunt, who has Multiple Sclerosis, a question my brother-in-law asked me struck a deep chord. While we waited outside my aunt’s room for the nurses to finish helping her into bed, he turned to me, knowing my interest in Japan and Japanese culture, and asked, “So what do you think of all that debris from the tsunami heading for the West Coast?”

To which, of course, I dimly replied “What debris?”

Thus began a project I’ve been embroiled in for nearly two years. It’s obvious when you think about it and remember those terrible images of the massive waves of water tearing homes and buildings to shreds, ripping huge boats and ships from their moorings, tossing about cars as if they were made of paper, but the numbers can be staggering.

Five million tons of debris were swept into the Pacific Ocean during that tsunami. Most of it sank, but it’s estimated that one and a half million tons are still floating out there, headed for the United States and Canada. Many people aren’t aware of this, even those who live in places like California, Oregon and Washington.

But as more and more of the items appear on our shores, news is spreading fast. It started with small items, like fishing buoys and shoes that were difficult to identify. Then, larger things began washing up:

By July of last year, I was well into my project, and fortunate enough to visit Oregon before that dock was dismantled. By then, however, it had already been burned by scientists with legitimate worries of invasive species. All these items have raised many other concerns: who pays for the removal of this debris? Who conducts the cleanups? How much more is coming?

And, perhaps most importantly: How can we identify an object and hopefully return it to its rightful owner back in Japan?

Amazingly, starting with that Harley Davidson that was easily identified about a year after the tsunami, such returns have been occurring. Last month, KGW, News Channel 8 in Portland, Oregon, compiled a special report about the debris called “Washed Away” in which a volleyball was returned to its originating high school in Japan, half a world away.

Such stories bring hope. And so I continue with my little project of tracking and writing about the debris with that hope in mind and heart.

And thankfully, Japan has been slowly but surely recovering from the most expensive natural disaster in human history, though in some smaller places the pace is slower than the many people still living in temporary shelters would like. And so my wish to someday return to Sendai Castle for another one of those ears of corn remains alive and well.